Anna Lavin: It was horrible. They died like flies and we lived near what is the Daroff Division now. It was called the Mt. Sinai Hospital. It was just horrible. And my uncle died there. And their son was thirteen and Raphael Sax lived across the street on 5th St. Their undertaking establishment, it was there then. And because of the neighborliness, my aunt died first, they took her to the cemetery and my father took, the thirteen-year-old boy also had the flu, and he was wrapped and my father carried him wrapped in a blanket to the cemetery because he had to say the prayer for the dead and came back. And I nursed over there and nursed at home.

Tony Lombardo: I have something in mind I will never forget though. In 1918, they had a disease broke here in Philadelphia, Influenza. Remember, right? And now, I was the only one well in the family. My brother was laid up with it, my sister was laid up with it, my father and my mother. Just me and my aunt we took care of the four of them, you know. So one time my mother was off so bad you know. My aunt says ,“Go call Doctor Penns”, a doctor on 9th and Federal. So I ran over to Federal Street and I was about 11 or 12 years old then.

Louise Abrucesse: We were the only family saved from the influenza. The rest of the neighbors all were sick. Now I remember very well, that rectory across the street from us, a boy about seven or eight years old died and they used to just pick you up and wrap you up in a sheet and put you in a patrol wagon. So the mother and father were screaming, “Let me get a macaroni box.” Any kind of pasta used to come in these wooden boxes about this long and that high and twenty pounds of macaroni fit in these boxes. “Please, please, let me put him in the macaroni box. Let me put him in the box. Don’t take him away like that.” That was it.

Lombardo: I remember that too. We had a friend lived on 11th and Carpenter. He had about six or seven kids. So this little baby died. She was about two-years-old, I guess, maybe less. And the undertakers couldn’t handle ’em. They were overpowered with work, you know. And he couldn’t get the undertaker to bury his daughter. So he says, “If I do get the job,” he says, “They have nobody to dig the grave.” Nobody wanted to dig any graves. He says, “I’ll dig the grave myself.” So you know what he does? He hired, over at 3rd and Bainbridge, he hired a horse and wagon. You remember those days? He went out and hired a horse and wagon for seventy-five cents. He put his little girl in the box and then he went off to Yeaden to the cemetery over there. He dug the grave and he put his own daughter in the grave. Nobody stopped him. 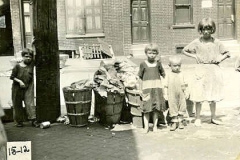 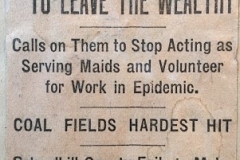 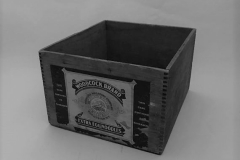 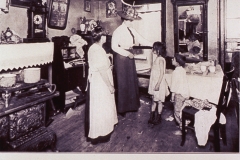